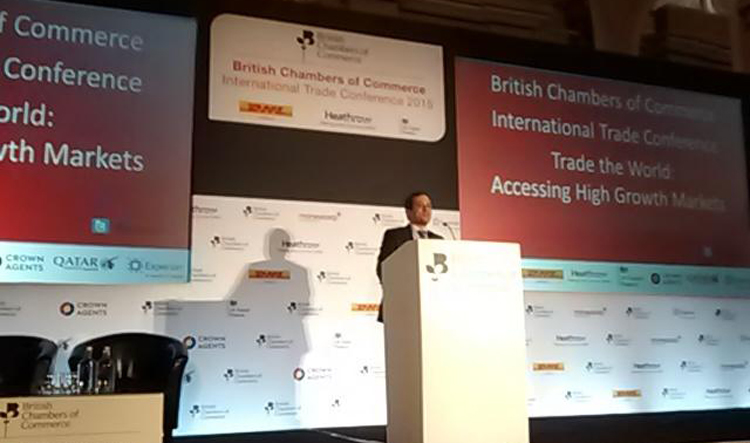 On 3 November 2015, the British Chambers of Commerce (BCC) held its fourth annual International Trade Conference – Trade the World, Accessing High Growth Markets. Speakers included representatives from government as well as British and overseas Chambers of Commerce; businesses who are Chamber members; and event sponsors (including DHL).

The main themes of the event were:

The businesses and organisations which attended the International Trade Conference clearly have a strong interest in exporting. Still, speakers such as the BCC’s Director General John Longworth and Kevin Brannan, Shadow Minister for Business, Innovation and Skills, made it clear that the export target set by Prime Minister David Cameron in 2012 (£1 trillion by 2020) is in clear danger of being missed.

The Q3 2015 Quarterly International Trade Outlook (QITO)– launched at the event – also shows that trade confidence has decreased across the country. Kevin Brennan noted that only one in five British businesses is currently exporting, compared to one in four German businesses – figures that haven’t changed since 2013.

Still, British businesses continue to be in a strong position to export. As DHL Express UK & Ireland’s CEO Phil Couchman stated in his foreword to the QITO, “UK businesses are resoundingly resilient. Even though the overall index has fallen, 54% of businesses state their export orders have remained constant. Indeed, when we look back over the last decade there have certainly been highs and lows for the UK economy, yet business has continued, and has often thrived.” Heathrow’s John Holland-Kaye also emphasised that with the right trade connections, Britain can be a powerhouse at the heart of the global economy.

Export support is there, but businesses need to take the initiative

Every BCC speaker emphasised that the organisation’s Global Business Network, which consists of UK and overseas Chambers and business groups, is there to help current and prospective exporters.

Francis Maude, the Minister of State for Trade and Investment, made it clear that the British government is fully committed to help more UK businesses grow at home and abroad. This support includes a new ‘Exporting is GREAT’ initiative (we’ll be sharing more information about this!) and ways to quickly identify real-time exporting opportunities.

However, the speakers also noted that it’s ultimately down to individual businesses whether they take advantage of the support or not.

To seize international trade opportunities, businesses need to take risks (and be patient!)

To reduce risk, make sure your company is a good fit for your target market based on local intelligence and business trips– don’t focus too much on a country’s ‘reputation’. Strong relationships take a long time to develop, so international traders shouldn’t expect too much too quickly.

Young entrepreneur Louis Barnett, Michael Wilkinson from Frog Education and the BBC’s Tim Davie emphasised how the ‘Britishness’ of their products helps them succeed internationally. However, the power of ‘Brand Britain’ can vary from market to market and shouldn’t be a company’s main USP.

Over the next few weeks, we will share more in-depth insights from individual sessions as articles here on the DHL Guide, so be sure to follow us on LinkedIn and Twitter and subscribe to our weekly newsletter to see when the new articles are out!