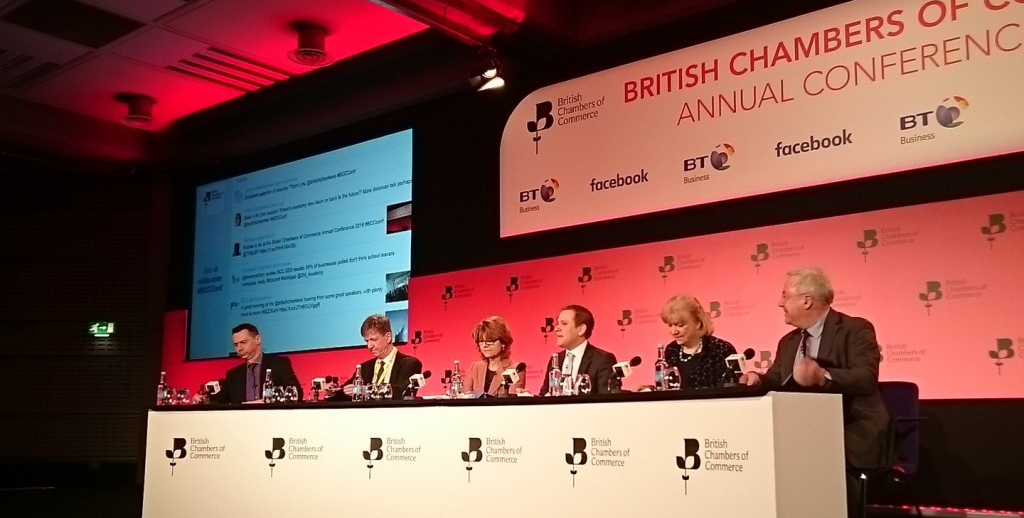 At the British Chambers of Commerce Annual Conference on 3 March 2016, political and business leaders examined the key issues which affect the UK’s economic and political future, with a strong focus on growing uncertainty, Britain’s role in the EU, and the importance of investing in the UK’s infrastructure. Here are the main points discussed at the event:

b>The global economy continues to fluctuate, but there are still plenty of opportunities for British businesses to succeed

In her opening speech, President of the British Chambers of Commerce (BCC) Nora Senior directly addressed that the changing global climate – including the economic slowdown in China, unprecedented migration in Europe, and Britain’s future in the EU – has created an environment of uncertainty. At the same time, Senior described the situation as an “opportunity to explore the state of our economy”: a chance to examine the UK’s relationship with the EU and focus on challenges within the country such as business and infrastructure.

In a video address, Prime Minister David Cameron outlined his mission to ensure that the UK is “recognised as the best place on the planet to start a business and to grow a business.” He further emphasised that the BCC has been a “true champion of British business” for more than 100 years, and that the BCC’s Global Business Network “will be a key partner to help Britain grow.”

Sir Martin Sorrell, WPP’s CEO, emphasised that British businesses need to seize the opportunities available to them to succeed, both at home and overseas, by being persistent and focused, not taking no for an answer, and acting quickly.

Secretary of State for Business, Innovation & Skills Sajid Javid focused on the UK government’s efforts to help British businesses by “creating conditions in which all businesses can thrive.” He also emphasised how important it is for British businesses to trade internationally as “in 2016 we can’t afford only to trade with the close and familiar.”

To better support British business, the country’s infrastructure needs to be upgraded

To ensure the UK retains its position as a key innovator, British businesses need sustainable infrastructure support. Leader of the opposition Jeremy Corbyn stressed that the UK’s infrastructure is now ranked 13th worldwide and that it’s important to “put investment, productivity, and sustainable investment first: we want to see the reindustrialisation of Britain for the digital age.” Corbyn also highlighted the importance of trade: “Britain needs to be exporting high-tech, innovative products around the world – but many small businesses with brilliant ideas hit a glass ceiling due to a lack of finance, bravery, and ideas.”

BT’s Colm O’Neill emphasised that thanks to BT and Fujitsu’s initiative to invest into the UK’s broadband challenge, 90 per cent of UK businesses now have access to fibre connectivity – more than in any other country in the EU: “The disruptive force of technology is an opportunity for the UK and an opportunity for UK business.”

Columnist Polly Toynbee similarly emphasised that while infrastructure is “the easy thing to cut,” it hurts British business in the long term. Network Rail’s Peter Hendy stressed that businesses need to speak up to government to have their interests heard and thus drive infrastructure development: “Crossrail was approved because businesses went to government and said unless you do this, businesses in London will suffer and we will move abroad.”

Speakers on both sides of the ‘Brexit’ debate shared their arguments for leaving or staying, with a focus on international trade

The EU referendum is now set for 23 June 2016. While the BCC itself holds a neutral position on the ‘Brexit’ debate, David Cameron emphasised in his video address to the delegates that he supports Britain staying in a reformed EU.

BCC Chairman John Longworth, in turn, stated in his speaking slot that (from his personal perspective), leaving the EU is best for Britain: “I believe Britain has a place in a reformed EU, but the EU will not reform” (Longworth has since resigned from the BCC).

Speakers Dr. Wolfgang Schaeuble (Germany’s Finance Minister) and Chancellor George Osborne made the case for Britain to stay – specifically from an international trade perspective. In Osborne’s words: “If the UK were to leave the EU, over 50 of our trade deals would automatically collapse.” Leveraging Germany’s close political and economic relationship with the UK, Schaeuble argued that the UK has already been successful taking steps to reform the EU, and can continue to make a difference: “I need allies to fight against red tape!”

In the subsequent panel discussion, Pro-Brexit campaigner Jon Moynihan argued that Britain will not be worse off in terms of trade as “we now sell more to the rest of the world than we do to the EU”.

In addition to these main issues, this year’s BCC Annual Conference also heavily focused on how technology can help businesses glow globally. We will be sharing more advice from Martin Sorrell and tips from Facebook’s Ciaran Quilty on how businesses can seize opportunities and best use online platforms to reach an international audience.