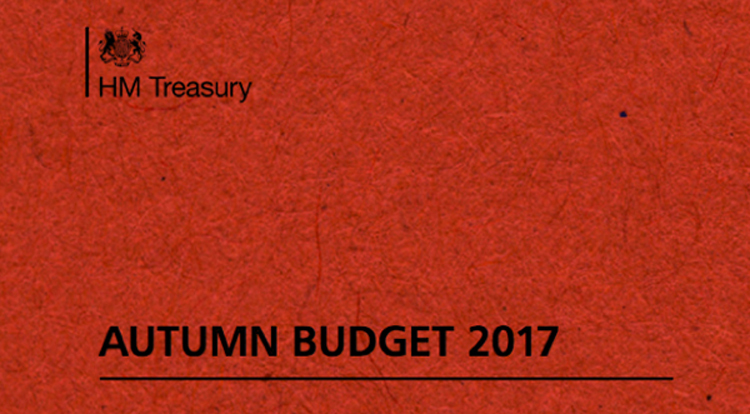 Chancellor Phillip Hammond has presented the latest Budget to Parliament on 22 November: a review of the UK’s finances and economic forecasts. Here is our overview of the key points of the Autumn Budget 2017.

UK economic growth
The chancellor took, what he termed, a balanced approach to the 2017 Autumn Budget. Ahead of the Budget Mr Hammond said he would use it to “look forward, embrace change, meet our challenges head on and seize the opportunities for Britain.”

There was a focus on supporting families and businesses in the short term and setting a path to a prosperous and inclusive Britain, building an economy that is fit for the future and beneficial for all.

The economic forecasts reflect a change; the Office for Budget Responsibility (OBR) expects to see a slower UK GDP growth, which has been revised down by 0.5 per cent to 1.5 per cent. Growth is then forecast to slow in 2018 and 2019, before rising to 1.6 per cent in 2022.

Inflation is forecast to peak at 3 per cent in the final month of this year, measured by Consumer Prices Index (CPI). It will then fall towards the target of 2 per cent over the next year.

Devolution and investment
The government agreed to a devolution deal with the North of Tyne authorities; this will see £600 million of investment in the region and create a new mayor elected in 2019 with powers over economic levers such as planning and skills. Additionally, Greater Manchester and the government will work in partnership to develop a local Industrial Strategy; £243 million has been allocated for the Transforming Cities Fund.

The devolved administrations will all get increased spending power in devolved areas, including education, health and transport. There will be an increase in money for Scotland, Wales and Northern Ireland.

Supporting British businesses
In his speech to Parliament, Hammond vowed to back the innovators who deliver growth and help businesses to create better and higher paid jobs. An extra £3 billion has been put aside for Brexit preparations over the next two years and the money will make sure that the government is ready on day one of the exit.

Business Rates will rise by the Consumer Price Index (CPI) two years earlier than planned. Business rates currently rise by Retail Price Index (RPI), a different way of measuring inflation which tends to be higher than CPI. Small businesses will also be glad to hear that, for the meantime, VAT thresholds will remain at £85,000 for the next two years. Although Hammond did reveal plans to consult whether the VAT design could better incentivise business growth.

In the Spring Budget Hammond acknowledged that there was work to be done in finding a better way of taxing the digital part of the economy. This Budget sets out the government’s approach to ensure digital businesses pay tax that is fair, given the value they generate.

International trade and export outlook
The OBR has revised up its net trade forecast for 2017 due to stronger exports growth in the first half of the year, and expects it to make a positive contribution to GDP growth of 0.4 per cent. The contribution then declines to 0.2 per cent in 2018 and makes no contribution to growth for the rest of the forecast period.

Business investment has grown moderately over the past year and surveys of export orders in 2017 have been robust, with some reaching their highest level since 2011. The Budget also set out to stimulate long-term business investment and exports with a plan to attract £20 billion of new funding in to high growth and innovative businesses.

The 2017 Autumn Budget also outlined plans to invest new funding in the NHS, abolish Stamp Duty on homes under £300,000 for first-time buyers, more investment to encourage maths and science in schools, new housing targets and financial support for construction and digital training courses, and the National Living Wage will increase from April 2018.

You can read a summary of the key announcements here